On Behalf of the AJSBA we would like to sincerely thank those that made this year’s Australian Jet Sport Tour a reality.  A special mention to the Manufacturer Sponsors, Yamaha and SeaDoo, who believed in the benefits and walked the distance with us all.  And we can’t forget the countless volunteers, you all know who you are, from the Jet Sport West crew, the New South Wales Club and Queensland’s Guy Greenland and Jordan Ross, we thank you sincerely.

Sydney SeaDoos James Masterton had a well-earned victory in the Premier Pro/Am Open Runabout Class on board his RXP-X 300 and will run the Australian #1 plate for the next 12 months. The top 5 closed-circuit tour craft were all SeaDoo’s with WA’s Clinton Mihala 2nd and Gavin Hughes rounding out the podium finishes.  These boys demonstrate the power of consistency across the tour.

The growth and support in the Pro/Am Stock Runabout Class has been outstanding this season and we were all truly honored to see Factory Yamaha rider Dennis Mack attend our tour rounds, onboard the Gold Coast Waverunner SVHO he was unbeatable. There was not a more worthy winner of the Inaugural and Perpetual Joey’s Pro Stock Australian Championship Cup and for those that attended the presentation, it can only be described as a humbling, emotional and cathartic moment for our much beloved sporting family.  2nd position overall was Brisbane Kawasaki’s Christian D’Agostin followed by new kid on the block Mitchell Wayt onboard the Yamaha.

As an initiative for the highly popular “Stock” Runabout Class this year we have included a 2014 Pro-Stock Manufacturers Cup that was taken out by Yamaha on their new SVHO platform, well done to the new Yamaha’s they have really put some thought into their latest craft.

The Premier GP Ski Class started remarkably strong in WA Round 1 with 15 of the fastest standups Australia has on the line.  The next 3 rounds quickly became a race between multiple Australian title holder Jake Barker and previous Junior World number 2 Joel Barry onboard their Open Hydrospaces, with James Xuereb always within boat length onboard his 1200 Yamaha Superjet. The young gun Joel Barry took the Tour Title and 1A number plate away from Jake Barker this year and has impressed everyone with his dedication, good sportsmanship and professional approach this season.

Lites Ski was dominated again all year by the race-proven Yamaha Superjet, stock out of the box these craft are second to none in PWC reliability and performance.  Taking out 1st place was Coast to Coast Boating’s Michael Stevens, 2nd was Sean Thompson and in 3rd Ryan O’Keefe.  We look forward to seeing some of the WA ski racers make the trip east for the 2015 tour.

The Endurance Supercourse format was once again a very popular choice by competitors with numbers steadily growing.  The final round was held as part of the 2014 Bridge to Bridge event, a 112km ski racing event down the Hawkesbury River NSW.  The Open Runabout Enduro podium was dominated by SeaDoos. With a consistent finish at every event, WA racer Gavin Hughes took the overall 1st placed position followed by Seadoo Sport and Leisure’s Clint Mihala in 2nd and TWT Concrete Pumping’s Brendan Boyd in 3rd.

The Pro Stock Runabout Enduro was dominated by the Kawasakis with Christian D’Agostin’s flawless displays of fitness and rider ability coming in 1st, Greg Hack 2nd and newcomer Cameron Martin 3rd. All gave great speeches and feedback about defending their titles and looking forward to next season.

Once again, thanks to all the sponsors across the tour, the manufacturers, the officials, marshals and volunteers, and the racers and their families for getting on board with this year’s tour and making it a huge success as a stepping stone for future years. Planning has already begun for the 2015 tour and we encourage everyone in the community to get involved with their local club, get involved with the AJSBA and support the growth of this great sport in this great country. Race safe. 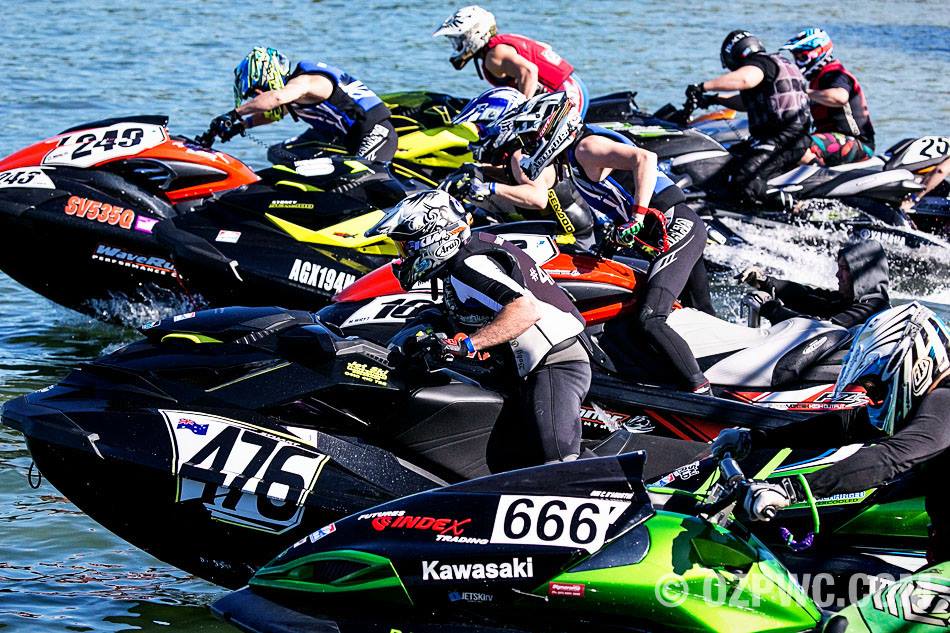