After seven rounds, three states, a cyclone, 139 races and 217 trophies the 2015 Yamaha Australian Jetcross Championships have drawn to a close. The AJSBA wishes to thank Yamaha Motor Australia for being the first primary sponsor of an Australian national tour for over 10 years and for providing the biggest prize in Australian racing for as many years. The AJSBA worked closely with three affiliate clubs to coordinate four weekends of action-packed racing at some of the best racing locations in the country and a small, tight-knit team have achieved great strides for PWC racing in Australia.

The tour began in January with a double-round weekend at the premier watersports facility of Burswood in Swan in Perth, Western Australia. Local affiliate club Jet Sports West went above and beyond to support a large cohort of interstate competitors, many of whom travelled over 4000km to gain a calculated edge over the east coast field. With an impressive turnout of local competitors it was the largest weekend of the tour and well worth the trip for many. Rounds three and four were waylaid by cyclonic weather in Queensland and rescheduled and relocated to Sydney, New South Wales. Two double-round weekends were hosted by the New South Wales Personal Watercraft club on the Georges River in March and May. This well established affiliate club took the additional challenge in their stride and the consistency and commitment of their volunteers shone through. The honour of the final round of the tour was bestowed upon the rebuilding Queensland Personal Watercraft Club in local conditions of enthusiastic competitor numbers and a prime racing location. Rough weather conditions again prevailed but the club and it’s supporters were dedicated and achieved a fitting final event for the tour.

The AJSBA recently introduced the Showroom Stock Runabout class to competition in Australia and the class received a great response from new and less-experienced racers looking to engage with the national competition. The freshest faced took on the endurance competition and we welcomed some competitors that we look forward to seeing at racing for many years to come. The Showroom Stock Runabout enduro first place was a tussle between Kawasaki Racing Team Australia (KRTA) team members Cameron Martin and Dane Alberti. With alternating results round after round it came down to the final event in QLD to discover who would take top podium place. The rough conditions at this event allowed fellow Queenslander Daryl Bone to sneak first place from both of them but a second place finish for Cameron Martin secured him the Showroom Stock Runabout enduro title for the year. Dane Alberti’s upcoming Prorider Watercraft Magazine cover is surely some compensation for his second place finish and Waverunner Performance Centre’s James Rice had a great first season racing to take out third place.

Waverunner Performance Centre (WPC) was also well represented in the Stock Runabout enduro competition. Coming off a great performance at the King’s Cup in Thailand, Mitch Wayt was a formidable force in this class and along with fellow team member Brett Douglas, battled it out with Jet Ski World’s enduro-experienced Ben Mountford. With a very tight spread of final points and some threatening interjections from NSW racer Chinni Rao, Mitch Wayt pushed his limits to secure first place with second placed Ben Mountford less than 60 points behind. Brett Douglas rounded out the podium with consistent results and the commitment to travel to Perth for the first two rounds.

The Open Runabout enduro class was clearly intimidated by the presence of endurance specialist Christian D’Agostin with small entry numbers across the tour. Christian’s fellow KRTA team member and team leader Jamie Eade was his closest competition with a one-two finish from the boys. Queensland newcomer Sam Burkett-Barratt put his hand up for a try and came away with third place at the end of the tour.

Perth competitors dominated the Lites Ski entries but first place was far and away the honour of NSW young-gun Tom Aiken. With Australian Jet Ski Parts’ (AJSP) support of this class Tom walked away with a number of gift vouchers for his four first-place finishes. An impressive performance by WA lites ski champion and Jet Sport West President Grant ‘Buzz’ Busby secured him second place and there was only a count back between third placed Kurt Eames and WA competitor Jye Schaap who ended up fourth. 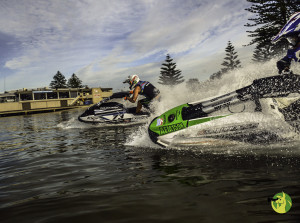 With Yamaha Motor Australia (YMA) on board as the primary sponsor for this year’s tour the creation of The Superjet Cup was formulated. A class only open to competitors on genuine, post-1990 Superjets, a grand prize of a brand new Yamaha Superjet was up for grabs for the tour winner. WA again contributed the largest number of competitors but with east coast travel a challenge the top three podium places were limited to NSW and QLD racers. Guy Greenland raced the first half of the tour and secured himself third place but the real battle was between current Vets Ski World Champion and Anglom Oil’s James ‘Xman’ Xuereb and Worx Racing’s Ryan O’Keefe. James nipped at Ryan’s heels every single moto of every single race day but in the end Ryan was unbeatably good and YMA Marketing Director Iain Macdonald had the pleasure of presenting a 2015 Superjet to Ryan at the final presentation ceremony.

The AJSBA was very proud to have Jetpilot’s support throughout the tour and podium finishers in the Stock Runabout circuit classes received Jetpilot prize gear across all seven rounds of the tour. The circuit competition included many of the same faces as the enduro racing with the addition of JSW Powersports’ newcomer Frank Waite and AJSBA President Justin Belczowski. WPC’s Mitch Wayt continued his dominance with an incredible seven first place finishes from seven events to secure the Australian Stock Runabout championship without a shadow of a doubt. Team mate Brett Douglas performed consistently and was rewarded with second place. It came down to the final event to determine third place but with President Justin Belczowski only completing one moto in Queensland was pipped by just one point at the finish, leaving Frank Waite to secure third.

Worx Racing’s Michael Stevens was gunning for a number one plate in Open Ski this tour and showed grit and determination at every turn but couldn’t wrangle Sea-Doo Centre’s Jake Barker from the position. Michael finished in a noble second place followed by SA young champ Joel Barry.

With current Australian champion James Masterton plagued by boat issues the Open Runabout class was blown wide open. This class saw entries across the board from JSW Powersports, Dan’s Jet Power, WPC, KRTA as well as a number of independent racers. The return of six-time Australian champion Anthony Antees was an honour for the competition and JSW Powersports’ Antees showed precisely how he won each of those championships with awesome performances across the country. Antees regained his number one place followed by Dan’s Jet Power’s consistent performer Paul Leven and WPC’s Matt Brunt in third despite a tour plagued with breakdowns. Honourable mentions must go do fourth-placed KRTA leader Jamie Eade as well as QLD stalwarts Guy Greenland and Christian D’Agostin. With only two appearances in this year’s tour Brendan Boyd managed to give us a taste of the great performance we might expect from him next year.

At the beginning of the tour the AJSBA partnered with Pro Rider Watercraft Magazine and official tour photographer Photo By Skip to bring a series of awards to the tour competitors. The categories and nominations are:

The Pro Team, Rising Star and Sportsmanship awards will be voted on by the AJSBA executive committee and announced soon. The Hotshot awards for ski and runabout will go live on Pro Rider Watercraft Magazine’s website for voting by the community.  An Instagram competition was announced by the AJSBA at the beginning of the tour and the winner will be announced and awarded their sponsor prize pack very soon.

We would like to thank our affiliate clubs, their committees and members for their hard work and dedication in making each event happen in a safe and enjoyable manner. International race director Ross Moore certainly can’t go without a mention; it has been a pleasure to work with him and a pleasure to be able to rely on his professionalism.

A huge thanks must go to each and every competitor who attended a tour round, took time off work, spent money on their watercraft and contributed to making this tour a success. Your dedication to the sport has made all the hard work worthwhile and we look forward to your continued and increased involvement in racing in this country. Keep an eye out for the announcement of a survey that we will be releasing to more formally canvass your views on the direction you want racing to move in the future and be sure to attend and be involved in the AJSBA AGM when it is also announced soon.

Lastly, to the very small and incredibly hard-working AJSBA committee who gave up the bulk of their spare time and effort for the past seven months to make this tour happen, it has been an honour and you have much to be proud of. See you next year.